At 85, Father Bill Watters wants to open another school in Baltimore. He needs $5 million.

By Dan Rodricks, published in The Baltimore Sun on December 12, 2019

I have arrived at a place where $5 million no longer seems like a lot of money, which explains why I can stand on the corner of St. Paul and Madison, in the city of Baltimore, and casually suggest that the Rev. William J. Watters not give up on turning the old Josephite headquarters a few blocks away into an elementary school.

Father Bill needs about $5 million. Surely, or at least theoretically, one of the country’s 2,000 billionaires — or one of the eight living in Maryland — can manage to donate that sum.

Michael Bloomberg has spent nearly $100 million on just the first month of his campaign for president, and all candidates, Republican and Democrat, have raised a combined $624 million already, according to OpenSecrets.com. The 2020 campaign is expected to reach $2.4 billion in total costs.

A few months ago, Forbes estimated the net worth of President Donald Trump’s cabinet. The Trump cabinet has had more turnovers than Muhly’s Bakery, but, at the time, Forbes counted 17 millionaires, two centimillionaires and one billionaire, with a combined net worth of $3.2 billion.

In most wealth surveys, someone with investable assets of $1 million or more (excluding real estate, employer-sponsored retirement plans and business partnerships) is considered a millionaire. By that standard, there are more than 7.1 million millionaires in the country, according to Business Insider. Maryland, with 178,000, has had the most millionaire households per capita for several years.

Meanwhile, Forbes found 2,153 billionaires living in the United States, with a net worth of $8.7 trillion. Because of the Trump tax cuts of 2017, many of them now pay income taxes at a lower effective rate than Americans in the middle class.

Which means the wealthiest families have even more disposable income than before: More money than they know what to do with.

So, I tell Father Bill, the 85-year-old Jesuit priest who already has established a high school, middle school and preschool for children from low-income families: Don’t give up on turning the former headquarters of the Society of Saint Joseph of the Sacred Heart, at 1130 N. Calvert Street, into an elementary school.

It will cost about $1.1 million to purchase the 120-year-old mansion from the present owners, and Father Bill already has a commitment for most of that from generous donors. It will cost probably another $5 million to transform the mansion’s grand interior into a school. But that’s nothing.

Certainly, or at least theoretically, there must be someone who can write such a check.

Father Bill is a Catholic legend in Baltimore. In 1993, he established Saint Ignatius Loyola Academy for middle school boys in the old Loyola High School and College buildings that fill the 700 block of North Calvert Street. Part of the space became Center Stage in the 1970s. St. Ignatius Catholic Church is at the north end of the block.

The academy, now with 113 boys in grades 5 through 8, moved to Federal Hill six years ago.

By then, Father Bill had raised enough funds to open Cristo Rey, a Jesuit high school in Fells Point for boys and girls from low-income families. Cristo Rey’s first classes were in 2007; there are 350 students in the school today.

Three years ago, the generosity of 12 families made possible the Loyola Early Learning Center, a preschool located on two floors of the Saint Ignatius Center, at Madison and St. Paul.

The preschool has 56 tiny, impossibly cute children now. The parents of these children have average annual incomes of $25,500, according to Erica Meadows, the school’s director. The parents are the working poor of Baltimore — nurse’s aides, teacher assistants, truck drivers, cooks, people who live at the bottom ridge of the country’s great wealth divide at a time of record income inequality.

These are the families Father Bill and his posse of supporters have been trying to serve all these years. Now he wants to fill a gap between preschool and middle school with an elementary school. John DiMenna of JMT, architects and engineers, has been helping with the assessment of possible locations.

The large space on Calvert Street once used by Saint Ignatius Loyola Academy turned out to be problematic in terms of meeting state building and fire codes for a new school. Another location on Calvert was too small.

But the former headquarters of the Josephites, an order of Catholic priests founded after the Civil War to serve African-Americans, had the right amount of space for K-through-4 classrooms. It just needed a lot of work to meet code for a new school, and that included installation of an elevator. A builder’s estimate for the project came in at $4.8 million.

“And I was told that was conservative,” says Father Bill.

He has an opportunity to buy the place until Dec. 31. But when I spoke to him, at the corner of St. Paul and Madison, he didn’t think such a thing possible.

And, of course, $5 million still sounds like a lot. But, considering the astounding amount of money flowing from sea to shining sea, and considering the cause, it should not be hard for Father Bill to get what he needs. Theoretically. 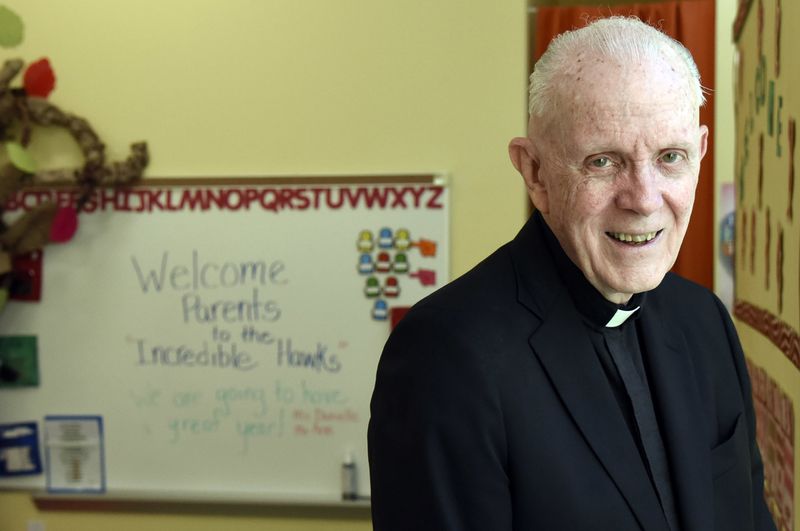 Peek into our classrooms & meet our little learners!