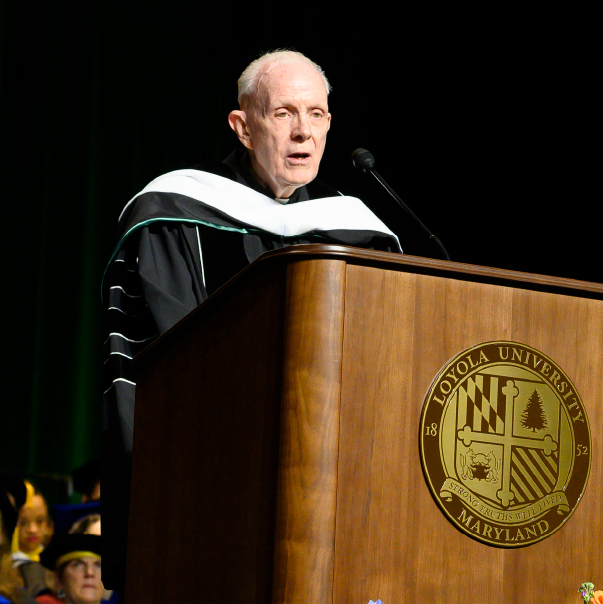 “I thank you for your spirit of commitment to helping others,” Watters told the Class of 2019, after commending the graduates for showing a keen interest in social justice. “It is that dedication to a faith that does justice which is foundational to Jesuit education.

“Now as you complete your years at this university,” Watters said, “you have the challenge to engage as men and women for and with others in our deeply wounded and divided world. It is that world where you will live out your strong truths and put into practice the full values of your Jesuit education. … Make your mission to be bridge builders and healers in the world you enter.”

Watters, 85, a member of the Society of Jesus for more than 60 years and a priest for more than 50, was also awarded the honorary degree of Doctor of Humane Letters during the Jesuit university’s 167th commencement exercises on May 18.

The degree citation said he was honored “for his dedication to the children of Baltimore; for his visionary and innovative leadership, particularly in the field of education; and for his example of Jesuit excellence and values.”

Watters is currently assisting priest at St. Ignatius Catholic Community in Baltimore and president of Loyola Early Learning Center, a pre-school he opened in 2017 to focus on the physical, emotional, cognitive, creative, social, behavioral, and spiritual of pre-kindergarten boys and girls from underserved communities in the city.

In two tenures as pastor, Watters transformed St. Ignatius Catholic Community in Baltimore’s Mount Vernon neighborhood from a struggling parish to a thriving one that attracts congregants from throughout the Greater Baltimore area.

During his priesthood, Watters has also served on the faculty at Loyola Blakefield, Maryland; as executive assistant to the provincial of the Jesuits’ Maryland Province in Baltimore; and in Philadelphia and Nigeria, among other assignments.

Those who wish to honor Watters on the occasion of his commencement address and honorary doctorate may want to consider a gift to the Loyola Early Learning Center.